It’s been about 48 hours since I started mining Monero and only a few weeks since I publicly stated that cryptocurrencies are in a bubble. Still intrigued by crypto, I thought there was even more to learn about it. So, I did what anyone would do and went to YouTube looking for a tutorial. In ten minutes I had a basic understanding of how to get started. Within 20 minutes I was mining. Here is a view of my dashboard after day one.

Well, I can’t say it’s not that hard. If you have basic coding, html or javascript knowledge, you can easily install code snippets on just about any web page. (This code has since been removed because it was triggering virus alerts.)

And if you’re not very tech-savvy, you can always click the link to open your own miner page. 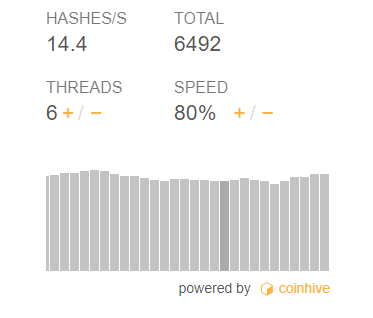 For Monero, the barriers to entry are low.

How lucrative is it?

Turns out it’s not very lucrative at all, at least for me. With a little effort, I earned 0.00006992 XMR. This is after I embedded some javascript on my hobby webpage. I get around 130-140 unique users with roughly the same number of sessions each day. I also ran the Monero miner page for several hours.

Meanwhile, I had javascript running on one of my web pages which was zapping my user’s computing power. I also noticed that my laptop tends to get very hot when the miner is running. That’s how you know it works, I guess.

How are you actually paid?

This is where things get a little more interesting. In theory, I made a nice profit of 3 cents. To get paid, I have to transfer these XMR items to some wallet where someone else facilitates the financial transaction, giving my virtual currency real value. If I try to transfer less than 0.5 XMR, I get a transaction fee of 0.005 XMR. At a minimum, I can transfer 0.02 XMR.

At this point, you’re probably lost. I’ll break it down more simply. In order to transfer the minimum amount of Monero (XMR) to a place where it can be transformed into real money, I must have accumulated 0.02 XMR. That’s $8 worth of Monero using the current exchange rate. At the current rate of accumulation, it will take me 286 days of mining, or almost a year. Supposedly, the rate at which XMR accumulates also tends to slow down. So it will probably be more like a full year.

Is there a way to improve this process?

Turns out a few people in North Korea figured out how to make this mining thing work. These guys hack your website and hide code there. Then, when visitors come to your website, it steals their computing power, mining cryptography in the background.

I would say that you probably need over 10,000 users per day to really rack up any significant profits.

Additionally, I received user notifications that the code I embedded in my website was actually triggering antivirus software to send alerts. I quickly removed the code from the website.

The information presented above shows one of the few value drivers for crypto, which is limited supply. At least that’s the theory. Right now, I can accumulate a very small amount of something that is in limited supply, in the virtual world. If I’m really tired of waiting, it might seem like a good idea to go buy some from the market. I can even hoard some of this virtual stuff because, you know, everyone’s probably going to want it someday. Why wouldn’t they? It’s the future.

This logic ignores the reality that the technology is open-source. There will be countless cryptocurrency competitors.

Is there value in blockchain?

Having learned this at a very rudimentary level, I can say almost unequivocally that the answer is yes. One thing about Monero that makes it a unique payment model is that it runs continuously in the background as long as your browser window is open. The longer your browser stays open, the more you get paid.

Currently, the old Internet advertising model rewards bloggers and content providers by paying for views and clicks. This has the unfortunate side effect of creating less engaging content.

Google (GOOG) (GOOGL) Adsense or another advertising program could be significantly improved by tracking engagement more meaningfully. Blockchain may be able to provide the answer to this. I don’t know for sure.

Is there value in cryptocurrency?

By now you know that I think crypto is in a bubble. Crypto mining managed to heat up my laptop a bit, warming my knees on a cold January morning. Other than that, the crypto mining process did not produce any meaningful results for me.

As a currency, value could come from facilitating faster and cheaper financial transactions. However, the technology is not there. Even attendees at a Bitcoin (COIN-OLD) conference could not use the currency to pay for the event. It has no value as money yet.

The bigger question is how to value something that has no backing, has no value as currency, and is expensive to create.

I don’t want to pick on other authors either, but here are some quotes from another author’s article on crypto titled Bitcoin And Altcoins – You Are Missing The Wave.

“Where does it end? I don’t think that’s the case. It’s not a bubble.”

“There are even tokens that simply invest in other tokens.”

“There are coins made like a JOKE that have a total market capitalization of several hundred million dollars.”

“I really love my job, but if I see a situation that makes me think I can retire in a few years, you can bet I’ll be working on it every spare minute I can find.”

Bitcoin and Altcoins – You miss the wave

Sorry, but that looks a lot like a bubble.

As I write the final thoughts, the price of Bitcoin, Ethereum, Ripple, and Monero are hitting new lows. On January 1, I wrote about the market caps of a few major cryptocurrencies rivaling the Lehman Brothers pre-financial crisis. The crypto speculative bubble should be a major concern for all market investors.

Editor’s Note: This article covers one or more microcap stocks. Please be aware of the risks associated with these actions.

The world is getting stranger every day. Case in point: The BBC reported today that West Midlands Police discovered a cryptocurrency mining operation consisting of “approximately 100 computer units” while searching a suspected cannabis farm. Cryptocurrency mining is not that different from cannabis cultivation. Both can generate surprising profits, both depend on a fair amount […]

Mining Capital Coin CEO and Founder Luiz Capuci Jr. was – in an unsealed indictment yesterday – charged by the DOJ with allegedly running a $62 million global investment fraud scheme . He is the latest of several crypto business leaders who have recently faced similar charges. Through his company, Capuci convinced investors to buy […]

Going from one of the oldest processes to one of the newest, Pine Bluff’s former commercial building is being prepared to become a cryptocurrency mining operation that could attract a $10-million investment. $15 million and employ up to 75 people, company officials said. Currently, the building, which has been mostly vacant since September 2020, is […]